For me, the major goal of this expedition was to see whether I was able to climb Everest without external support (camps, porters, deposits, communication in the mountain…) and by myself (one push, no jumaring…). I want to try what we usually do in other mountain ranges such as the Alps but in the Himalayas. The budget was also very low, and we wanted to do an express acclimatization so that we did not have to spend much time in the base camp. For all these reasons, my expedition is a bit different from the traditional ones.

I don’t have any problems to admit whenever I don’t summit a mountain. I’ve expressed many times that, for me, the goal itself is not the summit, but the journey. For example, just before Everest I was in the Cho Oyu. The weather was very bad and I had no visibility. The summit of Cho Oyu is a very big summit plateau, and I didn’t know if I was really on the top or just walking around the plateau. So I’m not sure I made the summit, and that’s fine. For Everest, the summit is very evident: a small place at the end of the ridge with flags, so it’s easy to know that you’re there.

From the very beginning of this Everest expedition, I decided that I did not wanted to carry any satellite phone or radio the day I’d attempt the summit. This is a choice that I made according to the way I understand the mountains, and it’s how I wanted to do it. I did not want to have any link to the base camp or back home to my family and friends. I wanted to test myself against the mountain, taking my own choices. It’s the way I want to go to the mountains.

Besides that, all the other decisions I took responded to this style. I didn’t had sherpas or external help, I wanted to climb alone without using fixed ropes. In spring is not possible to climb in Alpine style, because there is indeed ropes in the slopes, and the engagement is not the same, but I choose not to use them, nor for progress or safety. I also decided to climb without any harness or carabiner.

I did climb the 1st and 2nd ladder of the 2nd steep on the sides, I took the 3rd ladder one since the only creak to climb this part is behind (need to remove) the ladder,  and during the descent of the 1st summit, because it was many people climbing on that ladder, I downclimb using a old rope a meter left (looking down) from the ladder. The 3rd step I climbed some meters to the left on a snow and ice slope, and go down the normal gully.

The decision of not making a big cinematographic production, it was also a choice. Of course I could have organized a big expedition with a production company and cameraman with oxigen in different parts of the track to film me. I could have had a satellite phone on the summit to announce my journey. But I didn’t. It’s not my style and it’s not the way I want to go the mountains.

I was using the Suunto Ambit Peak watch, to be sure that it recorded a maximum of hours (in altitude - cold, batteries last much less). For both ascents, I used the mode GPS OK, so the GPS can record every 10’’:

http://www.movescount.com/moves/move159990476 It is recorded all the uphill to summit and downhill to 8300m where battery died after 30h56’. There is a track for all the way up. In the profile of altitude around 8600m you can see there is a straight 200m jump in altitude. There might be different explanations, maybe pressure decrease from day to night, but then you see that it continues to climb up 300 more meters.

Photos and film from the summit are part of the film “Path to Everest” (available on demand). Trailer: https://www.youtube.com/watch?v=cTb5_B0wSUQ

All the photos and videos have GPS position, altitude and time in the metadatas of the files, so it is possible to see the exact time and position of each of them.

I had a GoPro and filmed some parts during the day, and both sunsets (1st ascent before 2nd steep at 8600 and 2nd ascent at the beginning of summit pyramid at 8750). On the 1st summit I filmed on the top, and it is possible to see the flags just behind me on the dark.

In the 2nd summit I did not film on top, I was more concerned on safety and going down fast as weather was really bad, but I took 2 pictures of my watch so you can see where with the camera gps. This pictures were took going down when I leave the wind exposed ridge and rest for a moment, and reset the altitude for safety reasons during the downhill. I estimate that point to be 50m from the summit, in gps localisation it show at summit of the pyramid (8800m aprox) 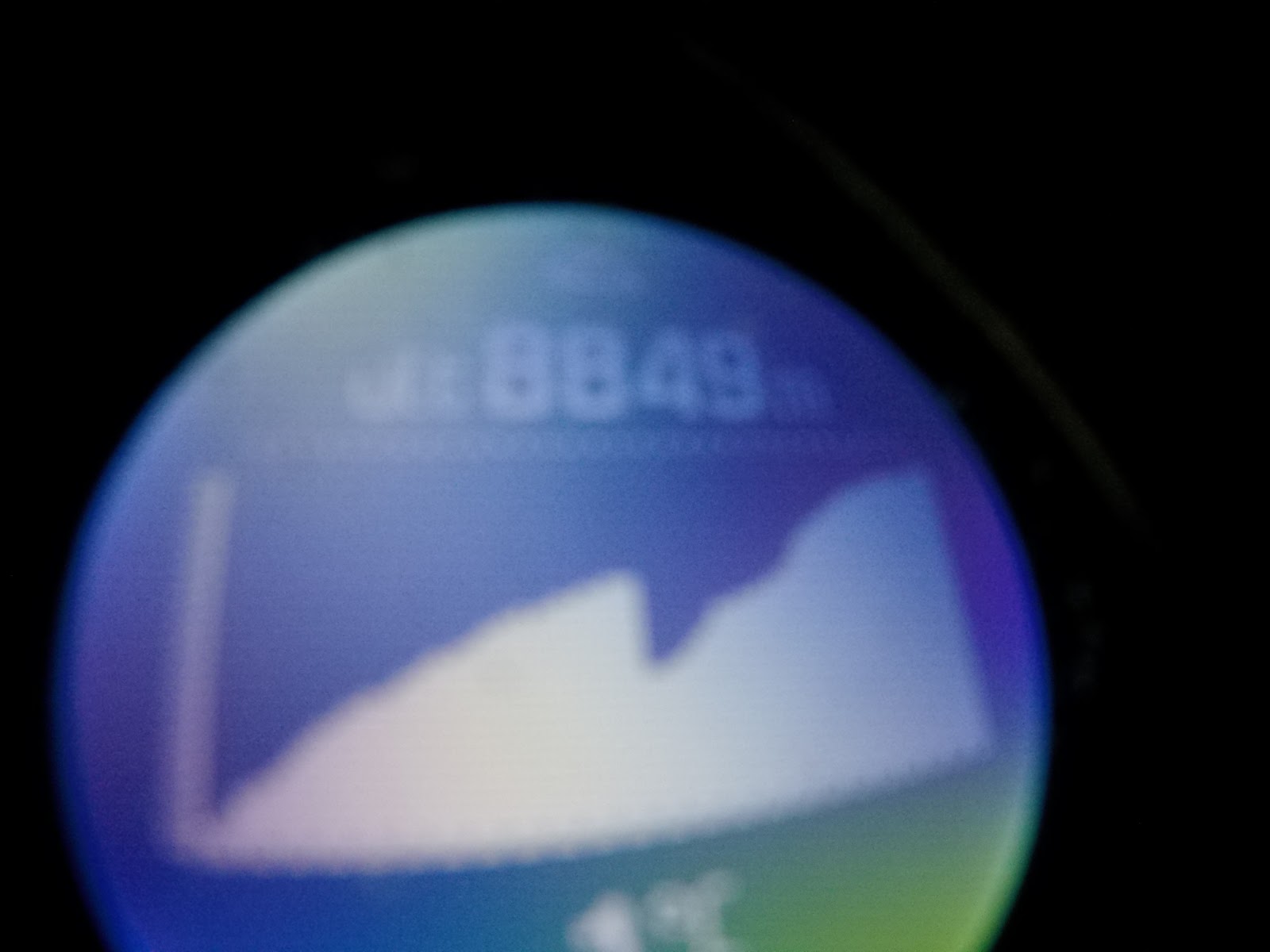 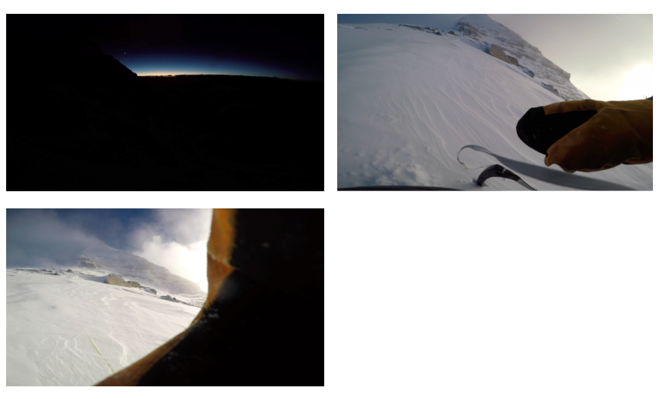 Here just some screenshots from the 2nd ascent between 8700m and 8790 at sunset and a bit higher at beginning of the night. 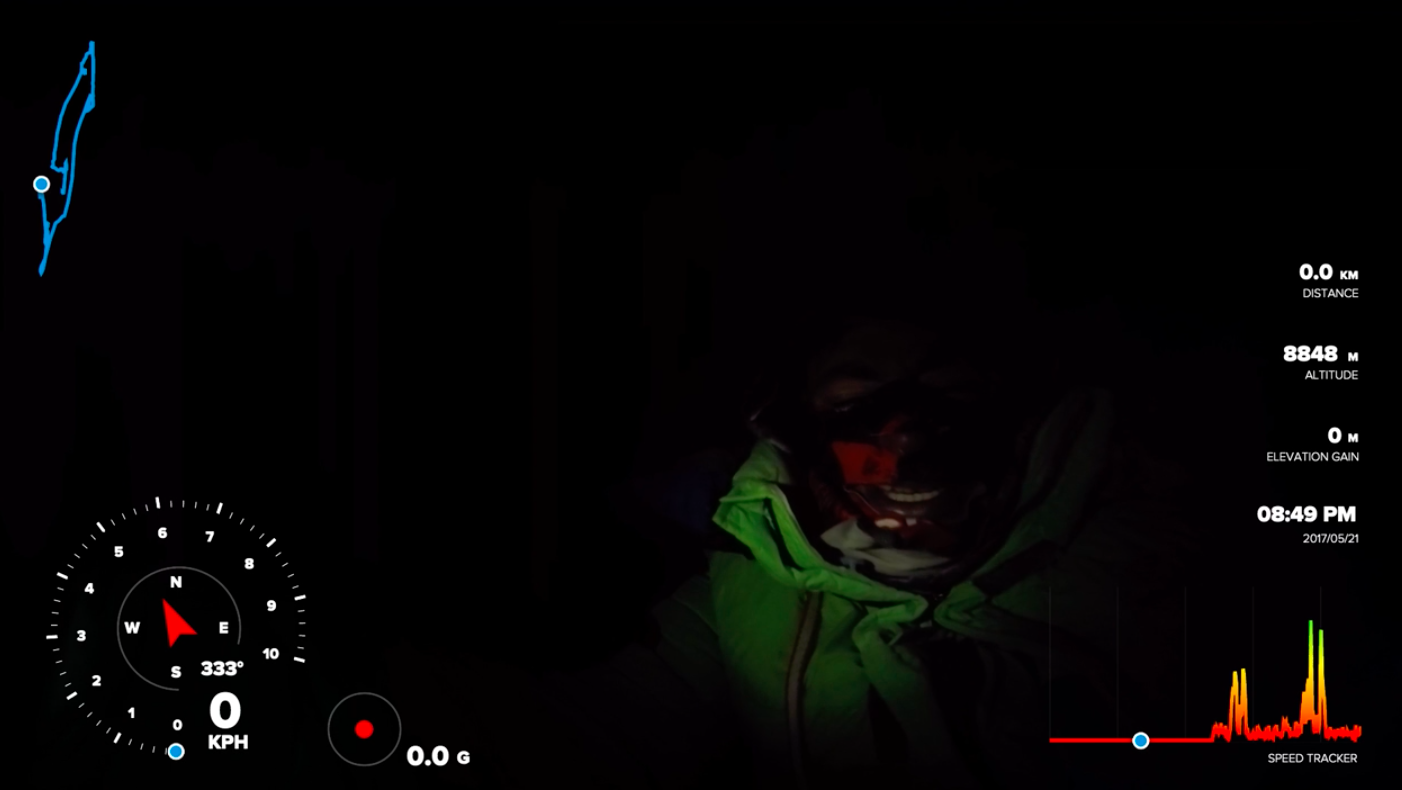 Explanations on Go Pro functionalities: https://gopro.com/help/articles/Block/How-to-Use-Gauges-in-Quik-for-Desktop and how to extract all metadatas in other format: https://community.gopro.com/t5/GoPro-Metadata-Visualization/Extracting-the-metadata-in-a-useful-format/gpm-p/40293 For pictures it is possible to see metadatas (location coordinates) in editing softwares as Lightroom.

Rodolphe Popier from Himalaya Data Base analysed the metadatas and timings of the images.

1st ascent: On the way up I passed the Russian (7 summit club), Indian (Transcend), British and polish climber (Janusz Adamski) expedition going to or installing Camp 3: they were getting ready for sleeping. I did a 10’ pause in a rock and continued climbing up. On the summit, I saw lights both on north side and on the south side that were coming up, they were higher on the north side. On the way down I crossed some expeditions (First the sherpas working and then a queue with clients and guides, I think the first ones were the Indian group) on the beginning of summit pyramid (after 3rd steep-8750) at around 1:30 - 2AM. There was some fresh snow there in the pyramid and to the summit so they saw my fresh snow tracks all the way to summit. Then I cross most of the people I’ve seen the past day (Russians, Polish, British…). They were climbing the 2nd steep when I was going down. Sherpas reported at Base Camp sawing my fresh tracks to the summit, as I was alone to climb the night and they were the 1st to go up, in the final pyramid they could see my only tracks to the top.

2nd ascent: Going up I crossed Ralf Dujmovits and the Japanese expedition going down before camp 3 (8.350). Around 2nd steep at the afternoon I crossed Cory Richards and Adrian Ballinger’s expedition going down (they filmed me). The last ones I crossed were the Russian expedition just some meters higher (between 2nd and 3rd step). During the night it was strong wind and some snow fall, not any lights both on north or south on higher parts. On the way down I did not pass anybody since it was bad weather and much snow on the mountain and all expeditions were down to ABC.

With this, I had on mind to reach the summit around 3-5 PM, so in the warmest part of the day I was in the higher parts, and also trying to minimize the people I would cross on the higher part of the steps so I could go faster. On the 1st attempt I was stomach sick, so I was forced to slow down after 7.800m. I decided to carry on anyway and that’s why I reached the summit so late. I wasn’t planning on climbing by night, but besides the stomach ache I was feeling fine in my head, no signs of edema, nor cold or tiredness. I never thought I was risking my life so that’s why I decided to carry on.

On the second attempt I was feeling much better, but the forecast wasn’t accurate and what was supposed to be a good day ended up with fresh snow and a very bad weather. I also felt more tired from the effort of the previous attempts so I also reached the summit after sunset. On my way back I got lost and into the North cole. Hopefully, I could find my way back and get down to the Advanced Base Camp safely.

UTMB: "When you compete, until race day, nothing is written"